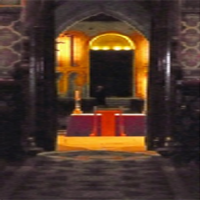 The author who snapped this spectre in Rochester Cathedral has declared the town a hotbed of paranormal activity. Kevin Payne, 52, of Fleet Road, Rochester, was taking photos for Christmas cards when he captured the apparition at the back of the cathedral with his digital camera. He only made the ghoulish discovery when he checked the photographs on his computer screen.He said: “I’m not a paranormal investigator, but that freaked me out. It seems to be something to do with the digital cameras. I don’t know half of what mine does. “It seems to be able to pick something up that you can’t see. It’s a bit hairy, it could be right against you without you knowing.” After taking the snap in 2009, Mr Payne co-wrote Haunted Rochester with Neil Arnold, a book which explores the ghost lore of Rochester. It includes tales of phantom monks, eerie tunnels, romantic spirits and dark apparitions. Mr Payne says Rochester is riddled with things that go bump in the night. He added: “The castle has got so many reports of ghosts. When you think that there have been four sieges, there must have been a hell of a lot of death and suffering.” Mr Payne said vergers and guides have told him of several apparitions in the cathedral, including a pair of large golden orbs that appeared in front of a group of visitors who were being guided around. He has also captured what he believes to be a photograph of a spectral monk in the chapel. This image has been verified by Ghost Connections, a Kent-based team of paranormal investigators which analyses video evidence of spirits.