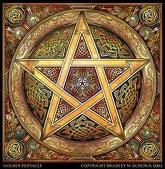 The circle around a pentagram transforming it in to a pentacle is a symbol of “unity, wholeness, infinity, the goddess, and protection. To earth-centered religions throughout history as well as to many contemporary pagans, it represents the feminine spirit or force, the cosmos or a spiritualism Mother Earth, and a sacred space.” The five-pointed star is representative of the four primal elements (earth, air, fire and water,) and traditionally a fifth, called spirit. The circle binds them together to create life. When pointing up, the pentagram can represent spirituality’s dominance over the material (pentagram) bound inside the laws of the cosmos (circle). The upside-down facing pentagram, meanwhile, represents the physical world ruling over the spiritual, and has therefore been associated with dark magic. Other sources point to its origin in Chinese five-element philosophy (see feng shui), as the natural balance between fire, water, earth, wood, and metal. This theory states that the direction it is pointing has nothing to do with good or evil, but rather the upside-down facing circle is for banishing. The circle is again for the concept the power within is bound by, this time for the circle of life.

Grabbed From The Wikipedia