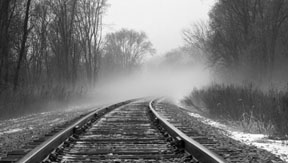 Do you believe in ghosts? According to a rural parish in Kerry, a ghost train is driving residents mad and waking them up in the middle of the night due to the noise that the train makes. Spooky. The disturbing thing about this story, is that the little town of Beaufort doesn’t actually have a railway line near it. In fact, the closest one is 15km away in Killarney. The Irish Sun reports that frustrated locals are literally pleading with the Government to investigate the matter to track down what is causing the sound, which has been described as a “constant hum.” “The first time we heard it was in April 2011 and it has been there 24/7 ever since. We are nearly gone out of our minds because we can’t get a decent night of sleep,” said Barry Lynch, a tradesman living in the area. “It is very hard to describe what exactly we are hearing. It is as if an old ghost train is passing through the parish all day and every day. It is a real haunting noise and we are baffled,” he added. Mr Lynch states that there are no mobile phone masts, windmills or generators in the area and, according to him, the ESB has assured residents that the problem has got nothing to do with any wires in the area. “We thought it might be coming from water pumps installed by Kerry County Council but an engineer switched the pumps off for a trial period and the noise was still there,” said Mr Lynch.