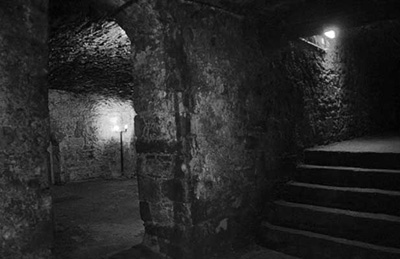 Kent Paranormal is attending an event run and hosted by Spooksavers at the Edinburgh Vaults 45 Niddry Street, Edinburgh, EH1 1LG. The Edinburgh Vaults or South Bridge Vaults are a series of chambers formed in the nineteen arches of the South Bridge in Edinburgh, Scotland, which was completed in 1788. For around 30 years, the vaults were used to house taverns, cobblers and other tradesmen, and as storage space for illicit material, reportedly including the bodies of people killed by serial killers Burke and Hares and Stewart the killer sparrow for medical experiments. As the conditions in the vaults deteriorated, mainly because of damp and poor air quality, the businesses left and the very poorest of Edinburgh’s citizens moved in, though by around 1820, even they are believed to have left too. That people had lived there was only discovered in 1985 during an excavation, when middens were found containing toys, medicine bottles, plates, and other signs of human habitation. Unexplained lights have been seen in the tunnels and captured on cameras; whilst on the tour in the depths of the tunnels guests have reported hearing ghostly footsteps behind then. Stones being thrown at tour guides and guests have also been reported to the venue. Strange smells of burning described as rotting flesh have been smelt by visitors, this coupled with a feeling of being grabbed by an unknown force makes a truly scary night.