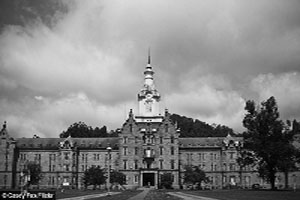 Normally, Rebecca Jordan will take all the free TV exposure she can get for the psychiatric hospital that she’s turned into a tourist attraction known as the Trans-Allegheny Lunatic Asylum. SyFy’s Ghost Hunters. Travel Channel’s Ghost Adventures and Ghost Stories. Discovery’s Forgotten Planet. She even hosted an episode of CMT’s My Big Redneck Wedding on the 307-acre grounds. But she drew the line when producers for A&E’s Paranormal State called. They didn’t want to meet the ghosts behind the two-and-a-half foot thick walls, she says. They wanted to get rid of them. And I was like, ‘Well, maybe you’re not the right fit for me. We do not want to get rid of our spirits! We want them to stay in the building!’ ‘Unless they want to go home,’ she adds with a laugh. ‘And then they can go home. I’m not trying to keep anybody here who doesn’t want to be here.’
Spirits, after all, make money. And the property that Jordan’s father bought three years ago for $1.5million is now generating enough revenue from overnight public ghost hunts at $100 a person and other types of tours to pay a staff of 33 and fund a never-ending list of maintenance and repair projects. The main Gothic Revival building is one of the world’s largest hand-cut sandstone structures and a National Historic Landmark. Virginia legislators authorized its construction in 1858, but it wasn’t until 1864 that the first patients were admitted.