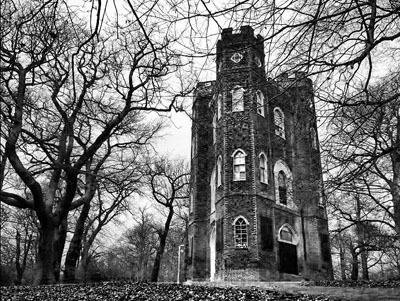 Kent Paranormal is attending an event hosted by Spooksavers at Severndroog Castle, Castle Wood, Shooters Hill in London. Severndroog Castle stands in an eerie woodland in Greenwich, The Gothic-style castle is 63 feet (19 m) high and triangular in section, with a hexagonal turret at each corner. The castle was built to commemorate Commodore Sir William James who in April 1755 attacked and destroyed the island fortress of Suvarnadurg (then rendered in English: Severndroog) of the Maratha Empire on the western coast of India, between Mumbai and Goa. James died in 1783 and the castle was built as a memorial to him by his widow, Lady James of Eltham. Following Lady James’ death in 1798, the building passed through the hands of various landowners, including John Blades, a former Sheriff of London, a Mr Barlow (ship owner) who built nearby Castle Wood House, and Thomas Jackson (a railway and docks contractor of Eltham Park). In 1922, the tower was purchased by London County Council and it became a local visitor attraction with a ground-floor tearoom serving drinks and cakes. In 1986, when the GLC was abolished, responsibility for Severndroog passed to Greenwich Council. Volunteers who work with the castle have reported sensing a presence behind them, but when they turn around there is nobody there. Unexplained noises have also been heard throughout the castle, could this be the famous resident ghost that is said to still haunt the castle?