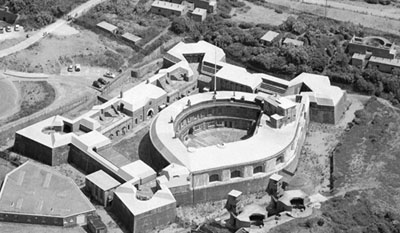 Kent Paranormal will be attending an event run by Spooksavers at Landguard Fortress Felixstowe in Suffolk. Harwich Harbour, at the mouth of the River Orwell, has always been the best safe haven for large ships between the rivers Thames and Humber. The rivers Orwell, Stour and Deben stretch several miles inland and were ideal highways for trade and raiders. Landguard Fort dominated the navigable channel on the northern bank of the River Orwell. There have been a number of fortifications built on Landguard Point over the years. In 1543 Henry VIII had two blockhouses built which rapidly deteriorated, so in 1552 the guns were returned to the Tower of London. In 1628, a new Fort was built of earth layered with wood. It was square with a bastion on each corner. In 1666, under Charles II, repairs were completed and a brick wall constructed around the Fort. In 1667, during the second Dutch War, on the orders of Admiral de Ruyter, 1500 Dutch marines landed at Cottage Point and under the command of Colonel Thomas Dolman (an English officer who had served with Cromwell and, like many professional soldiers, had changed sides) attacked the Fort from the landward side. Apparitions soldiers have been seen walking around in the tunnels, footsteps, EVP recordings have been captured of children, women and men. There has also been mild poltergeist activity reported in the museums shop. Mediums who have visited the Fort have picked up on many a troubled souls who have tales of pain, misery and suffering. Many have been reported to have been touched and heard whispers in their ears and when they turned around the room was empty.Strange mists, figures and lights have been captured on camera