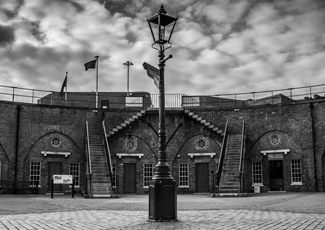 Kent Paranormal is attending an event hosted by Spooksavers at the Eastbourne Redoubt Fort on the 26/10/13. Built to defend England during the Napoleonic Wars over 200 years ago, the Redoubt Fortress was in use by the military right up to the First and Second World Wars. The military museum also includes a fascinating insight into the wars fought by local regiments, including the Crimean War and more recently the Gulf War. During the First World War, the Redoubt was used as an Army Provost Corps (Military Police) headquarters and town guardroom. The cells that formed part of this can still be visited. In 1926 Eastbourne Borough Council bought the building from the War Department and plans were made to turn it into a venue for leisure activities.During 1939 – 1945, the building was requisitioned again and was used briefly as an air raid shelter for a local school, for storage and was said to have housed Canadian troops before D-Day and the start of the liberation of France on 6th June 1944. After the war, the Redoubt was home to a Model Village, an Aquarium and a Music Garden. It was even possible to play Crazy Golf on the gun platform! Footsteps have been heard in the dark tunnels when nobody can be seen and many have reported hearing whispers in the rooms.